“Clean this mess off the table, it’s dinner time!”

I believed early on (around age 5) that I was very creative.  While I received some positive reinforcement from time-to-time from parents (“Clean this mess off the table, it’s dinner time…oh, that’s nice, Carolann, now move it!”), teachers and fellow students (“Wow, yours looks just like mine!”), but one early and memorable incident sustained me until I re-discovered art in my mid-life.  I was eating paste long before the rest of you even inhaled it’s heavenly scent. I became Mrs. Palmer’s pet.  Mrs. Palmer was our grade school’s art teacher.  Using a noisy, rickety rolling cart, she traveled from room to room once a week, with a surprisingly large treasure trove of art supplies.  And she was so pretty!  She had a soft, encouraging voice and coming from a family of 7, trust me, no one EVER spoke to me in a soft voice.  And she wore her dark hair in a french twist. I had such a crush on her.  And the day I heard in that kind voice, “Carolann, would you please help me by passing out one piece of black paper to each student in the class?  Thank you (sweet smile).”  She had me at “Carolann” – only time I heard my name was in a dangerous you-re-gonna-get-it scream at home.

We had this modest little lighted showcase in the Indian Springs Grade 1-6 school lobby reserved for outstanding artwork.  Being competitive – hey, as the middle child of five hungry and LOUD competing mouths, you can bet your hot cross buns I was a worthy competitor – my art was featured there frequently.  And contests!  I entered contests thanks to the encouragement of Mrs. Palmer. A feeling of pride and accomplishment I can’t quite put into words.

A local department store sponsored a city-wide art contest for all grades and schools in Akron, Ohio, and my Favorite TV Show art entry was chosen for display in the department store’s auditorium.  A little white honorable mention ribbon was taped to my art!  How was I to know that EVERYONE received a little white ribbon?  I was so inspired.  Do you want to know what my favorite TV show was?  FLIPPER.  Darn, I loved that smart little chattering dolphin and dreamed of having a pet one some day, so quite natural I would draw a little Flipper dolphin inside a cool TV frame and even watercolored the network’s peacock over his head.

In seventh grade, soaring on Mrs. Palmer’s praising wings, I eagerly signed up for art. And met the grouchy, miserable, mean old Mrs. Ada Wilcox. The first week, we were drawing little fantastical big-eyed girl figures (all the rage, remember?) and I was so into it until I felt Mrs. Wilcox hovering over the top of my head, her perfume (it was Tabu) suffocating. “Your art isn’t very good, Carol.  It really isn’t.”  I ran from the room crying.  And dropped the class later that day.  I never even returned to collect my art from the box with a masking tape label that read “Carol M. GR7”. Give me a break.  A 12-year old born in the 1950s should survive that unscathed?  Fragile and discouraged, I quit making art. That cringe-worthy moment haunted me for years.  Ahhh…be careful of your words, friends…..

And then my life fell apart….

At a time in my life, in my late 50s, everything collapsed. All I’d known as truth was gone. I never saw it coming and quite ill-prepared to deal with the emotional fallout. Sometimes I hear the argument a heart cannot be ‘broken’ but I can only say that I was utterly broken and my heart strained beneath the weight of what happened. In desperation to express extreme emotional toxicity, I began to create again. In a frenzy. When I say creating art saved my life, believe me – I mean it.  I felt I was creating out of body.  I read about art, bought art magazines, took a few local painting classes – I was so hungry to put the pain into something I could see, touch, imagine. Each piece had a deep and very dark secret. Each piece so full of emotion, brought me closer to making sense of what became tragic thoughts. I cried, I wrote, I painted over, I tore into each piece, often waking in the middle of the night to create. I had sought the help of a professional to help me sort out feelings and rebuild a stable foundation but I needed a more tangible way to push the sludge to the surface, dump it out, and clean the vessel of “me”. I didn’t care what anyone thought of my art nor did I seek opinions, instead, I felt it was perfect.  I was revealing myself and my artwork gave evidence. I created for me.  Each piece a metaphor for what had happened, what was happening and what the future could be. My being, still raw from heartbreak, now open and ready to receive. And learn to depend on my inner self’s strength and courage.

We are all artists.  We are all born with the innate ability to create.  Sometimes it takes the floor being ripped out beneath us to fully return to our God given roots. 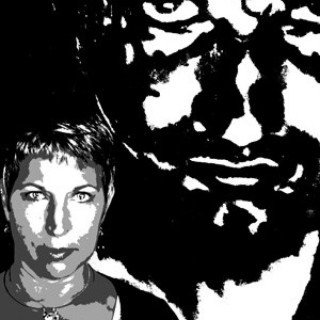 I am an artist, professional yoga teacher and Ayurveda Wellness Counselor.